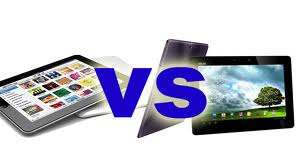 Apple’s iPad 3 is enjoying a healthy amount of attention in the run-up to its official unveiling, which is rumoured to take place in March of this year.

Irrespective of its pros or cons the device, which will undoubtedly sell by the truckload, doesn’t have such a clear run at the market this time round.

Devices like Asus’ Eee Pad Transformer Prime have raised the bar in the tablet market and given Apple’s slate big shoes to fill, and we’ve decided to collate all the reliable leaks, speculation and predictions to see if the device has what it takes.

Asus’ Eee Pad Transformer Prime has power to burn thanks to its mighty Nvidia Tegra 3 chipset, which boasts a quad-core CPU clocked at 1.3GHz and the next generation of ULP GeForce GPU’s.

The device also has 1GB RAM, offers 32 or 64GB of on-board storage and also supports Micro SD cards up to 32GB in capacity.

According to several leaks Apple’s iPad 3 will also boast quad-core architecture, but knowing Apple the A6 chip will be quite conservatively clocked, likely to around 1Ghz. We expect the device will also pack 1GB RAM, rather than the 512MB on offer in the iPad 2

Don’t expect support for removable memory though. We can’t see Apple changing the habit of a lifetime. Having said that, with a quad-core CPU and Apple’s software we can’t see Android holding a candle to the iPad 3’s processing power.

The iPad 2’s display is excellent, and we expect Apple to push the iPad 3 even further. According to sources we are looking at a display with the same dimensions but double the resolution of the iPad 2 at 2048 x 1536.

The device is also rumoured to have a pixel density well in advance of both its predecessor and Asus’ Eee Pad Transformer Prime, with a rumoured 264PPI.

Asus’ Eee Pad Transformer Prime isn’t lacking on the screen front though. Its 10.1-inch Super IPS+ LCD display is far and away the best screen we’ve seen in an Android tablet and with a resolution of 1280 x 800 and a pixel density of 149PPI it’s easy to see why.

Corning’s Gorilla Glass offers a neat layer of protection on the Transformer Prime’s screen and we expect to see a toughened coating over the face of the new iPad too, though whether it will be Corning’s next-gen Gorilla Glass 2 is anyone’s guess.

Both cameras on the Asus perform well with the primary offering easily outperforming any other tablet camera we’ve used to date.

The iPad 3 will likely feature an improved camera, with some parties predicting an 8-megapixel snapper like that seen on the excellent iPhone 4S, which will likely benefit from autofocus, LED flash and geo-tagging.

We also expect the iPad 3 to offer 1080P video capture too.

The secondary camera is a shoo-in for an upgrade too, and we expect to see the VGA offering of the iPad 2 removed and replaced with a 1.3-megapixel snapper capable of offering FaceTime in glorious 720P HD.

If the predictions are accurate users will be very pleased by the upgrades, as the iPhone 4S is one of the finest smartphones for photography on the market.

Rumours are rife that the iPad 3 will be the first Apple device to offer a curved glass display and will also be notable for being thicker than previous devices, though the minor increase in waistline is expected to foreshadow a big increase in battery life.

That aside we don’t think the iPad 3 will differ terribly from Apple’s tried and tested design aesthetic. It will be slim, it will be sleek and will be more minimalist than an Anne Truitt Christmas card.

The back of the device is a marvel for the ham-fisted, with little to offer in the grip department. It isn’t unpleasant to regard though, thanks to a brushed-metal style finish.

For its virtues one can’t laud the Transformer Prime though. It doesn’t break any new ground and for that reason alone the iPad 3 gets our vote of confidence in this round.

Tradition dictates that Apple will release a new iteration of its hugely popular iOS platform with the iPad 3.

Details of what to expect are thin on the ground at this stage but we’re looking forward to seeing some significant bug-fixes, enhancements to offer better batter life, and improved multi-tasking, along with 3G & 4G support for FaceTime and improved security functionality to rival Google’s Face Unlock.

Beneath the improvements, iOS will still be the same usable piece of software that everyone has grown to love with hundreds of thousands of apps and a super-intuitive UI.

The Transformer Prime has just been updated to Android 4.0, and the benefits of this upgrade are multiple – we’ll be detailing them in a separate review.

Features such as an improved notifications system, new UI and overhauled core applications, like Gmail and Google Maps, add to the devices charm and the 400,000+ apps available in the Android Market do nothing to harm the device’s reputation either.

Still though, Google’s tabet platform is still grossly underprepared for real battle in the tablet markets. But at least Android 4.0 is a step in the right direction.

Leaks point to the device being a mouth-watering prospect, with tons of improvements and a display to die for. And when you add these predictions to the foundation laid by the iPad 1 and iPad 2 you’re left with the feeling that the iPad 3 is going to be something very special indeed.

The Asus Eee Pad Transformer Prime is no sucker though. It’s far and away the best non-Apple tablet on the market, and we predict it will remain so for some time yet.

For those of you unburdened by brand loyalty, the iPad 3 (and even the iPad 2, which will see a price drop upon the new tablet’s release) remain the best choices on the market. With excellent visual quality, and fantastic battery life.