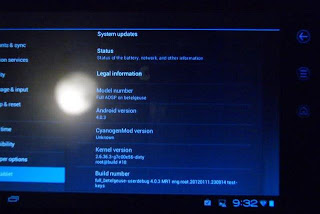 href=”http://www.dell.com/” rel=”homepage” target=”_blank” title=”Dell”>Dell might have stopped selling the Streak 7 in the US, but that does not mean there is no more life in this particular tablet. No sir, a community of unofficial developers have come together to conjure a beta build of Android 4.0 Ice Cream Sandwich, where they borrowed several elements from the href=”http://www.cyanogenmod.com/” rel=”homepage” target=”_blank” title=”CyanogenMod”>Cyanogenmod team. There is a giant disclaimer over here just in case you think that your Streak 7 deserves a resuscitation in case anything goes awry, making sure that this is not for the faint hearted, but for seasoned veterans instead. We do know that this beta build will see Wi-Fi connectivity working on your Streak 7 after installation, including most of the href=”http://www.google.com/apps/” rel=”homepage” target=”_blank” title=”Google Apps”>Google apps, audio playback, touchscreen display, rotation sensors, the ability to capture a screenshot, not to mention the capacitive buttons working just fine, alongside USB mount capability an external storage.

There are still lag issues involved, and the camera fails to launch, not to mention being unable to take advantage of the built-in href=”http://www.bluetooth.org/” rel=”homepage” target=”_blank” title=”Bluetooth”>Bluetooth connection. And yes, GPS will not function as well, in addition to 3G/4G/GSM radio, so Wi-Fi’s all you got at the moment.