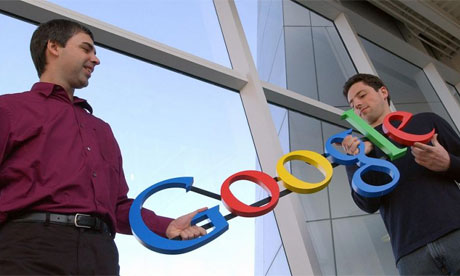 In an interview by Bloomberg with Larry Page yesterday interviiewer puts Questions off to Larry that: Was Steve Jobs’s anti-Android rage all just for show? Was getting into social networking a good idea for Google? Is Google even really still a search company, or are they something else?

In answer to these questions Larry Started saying that google has launched many products like Youtube , Chrome, etc and are doing very well adding Google Plus also. Another question that is Google search company? Larry answered that “basically our soul is the same.” He said out that Google’s basic mission is the same: “using large-scale… technology advancements to make people’s lives better, to make community better.”

Now its turn for Android v/s Apple means Apple’s late CEO, Steve Jobs. when interviewer asked about differences between Page and Jobs,Page said that “I think the Android differences were actually for show.” When insisted for elaboration Page said that the rivalry serves Apple’s interest: “it’s useful for them to feel like they have an obvious competitor and to rally around that.” He also said that Google takes a different stance: “You don’t want to be looking at your competitors. You want to be looking at what’s possible and how to make the world better.”

He says that “I personally believe that it’s better to shoot higher. You don’t want to be looking at your competitors. You want to be looking at what’s possible and how to make the world better.” Google may not want to look at its competitors, but by Page’s own admission, it will need their data to get where it’s going. The simple fact of the matter is that rivalries are good for business, no matter what business you’re in. Peaceful coexistence is great, but it doesn’t give consumers any reason to pick an iPhone over an Android phone.