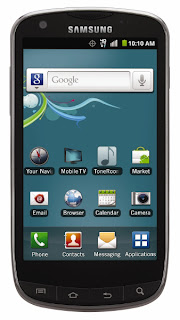 With LTE Support Samsung Galaxy S Aviator smartphone is scheduled to be launched by U.S. You can now purchase it online and in stores for $199.99 after a $100 mail-in rebate, but “select” LTE cities will be selling it for $100 less . The Aviator is very similar to the Samsung DROID Charge that was unveiled by Verizon Wireless last year, the phone features a 4.3-inch Super AMOLED Plus display, 8MP camera, and run Android 2.3.6.

CHICAGO (April 5, 2012) – U.S. Cellular (NYSE: USM) and Samsung Telecommunications America (Samsung Mobile), the No. 1 mobile phone provider in the U.S.1, have announced that the Samsung Galaxy S® Aviator™ is available today, both in stores and online at uscellular.com. The Android™-powered smartphone runs on the 4G LTE™ network, with speeds up to 10 times faster than 3G, and is the first 4G LTE smartphone in the carrier’s device line-up. The Galaxy S Aviator will be available for $199.99 after a $100 mail-in rebate. For a limited time, the smartphone will be available for $99.99 after a $100 mail-in rebate in select markets covered by the 4G LTE network. Visit uscellular.com for detailed pricing.

Powered by Android 2.3.6 (Gingerbread), the Galaxy S Aviator has a 4.3-inch Super AMOLED™ Plus touchscreen and front-facing camera for easy video chatting. This sleek and slim smartphone allows you to connect quickly to entertainment and the Internet on-the-go. Users also have access to Google Play, formerly known as the Android™ Market, a one-stop shop for Android users to access nearly half a million apps, millions of songs and books, and thousands of movies.

“We are excited to bring our customers our first 4G LTE smartphone to help them get more done in less time,” said Edward Perez, vice president of sales and marketing operations for U.S. Cellular. “The faster downloading and browse and talk function make it the go-to device for customers who depend on their smartphone to keep up with their busy schedules.”

U.S. Cellular customers enjoy unique benefits, such as new devices faster without resigning contracts, free Overage Protection and free Battery Swap. U.S. Cellular also offers customers the only points-based rewards program in the industry, which rewards customers for simple things, such as paying bills on-time, adding a line or referring friends and family. Points may be used for faster phone upgrades, additional lines, devices, accessories and ringtones. It’s one of the reasons U.S. Cellular has the happiest customers in wireless.