Home » News » Try CyanogenMod 9′s custom launcher, 4.0.3 and root required
Are you a super modder who imported the Galaxy Nexus on day one, then rooted it and installed your own custom version of Plan 9? Well then, this mod is probably a little bit beneath you. But if you’re slightly less crazy, you’ll definitely want to try out the custom Trebuchet launcher, CyanogenMod’s tweaked version of the Ice Cream Sandwich home screen application. It brings a suite of new options to Ice Cream Sandwich’s standard launcher, the likes of which will delight those addicted to home screen customization for sure. Check out this XDA thread to get started. 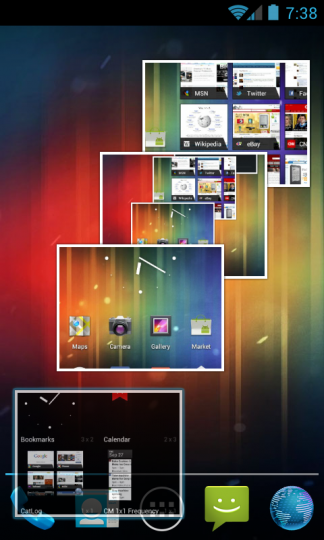 Now for the bad news: you need to be running the latest Android Ice Cream Sandwich build in order for it to function, version 4.0.3. Only a few Nexus S phones currently run that, since Google suspended the update, though there’s plenty of custom ROMs built from AOSP code that have the latest version. You also need to be rooted, and install the app to the /system folder via either ADB or something like Root Explorer. If all that seems a little much, just wait for the first beta builds of CyanogenMod 9 – odds are that if you’re reading this, you’ve got a phone that’s on their official list.
For Galaxy Nexus and other ICS users who want a little less extreme customization, check out Nova Launcher. It’s also a modified version of Ice Cream Sandwich’s smartphone homescreen, but it’s a lot more friendly as far as versions go. You can install it as a regular non-Market app, or push it to your /system folder for a few more bells and whistles. It even works on tablet ROMs, or at least on the one I’ve tried so far.
[via Phandroid]